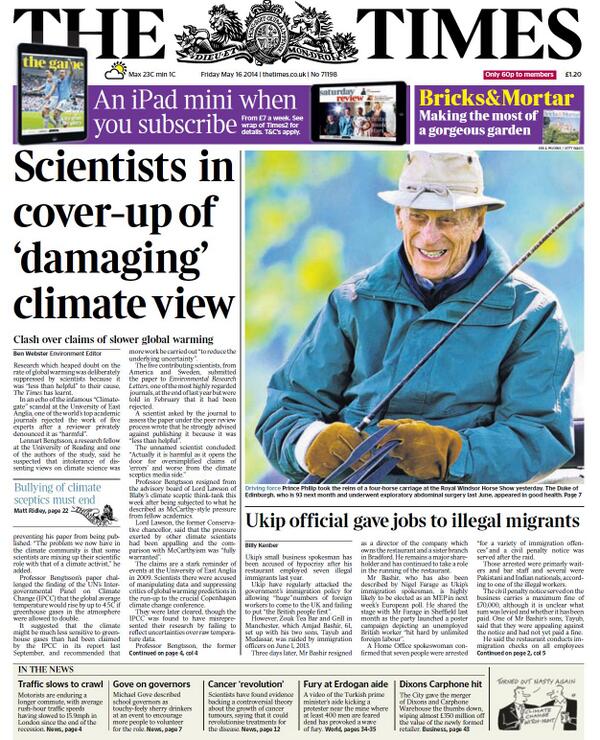 Today many people are surprised that The Times turned non-news into news by putting it on their frontpage: the fact that a paper by Lennart Bengtsson was rejected by Environmental Research Letters. Rejections of papers happens hundreds of times a day, so why put it on the frontpage? Well, the answer is simple, because it fits into a larger “story”. The larger story of course is that Bengtsson accused the climate science community of McCarthyism.

Bengtsson himself is feeding this larger story by saying in the article:

Lennart Bengtsson, a research fellow at the University of Reading and one of the authors of the study, said he suspected that intolerance of dissenting views on climate science was preventing his paper from being published. “The problem we now have in the climate community is that some scientists are mixing up their scientific role with that of a climate activist,” he added.

Non-news becoming news happens all the time in the media, this is how they work. When they smell there is an “affair”, tiny things suddenly get promoted to the frontpage. This happened after climategate as well. Suddenly it was news that AR4 wrongly claimed that Himalayan glaciers would be gone in 2035. I am convinced that without climategate all these other IPCC “gates” wouldn’t have been picked up by the media.

The Dutch journalist Tomas Vanheste was surprised how good this worked. He discovered a minor error in the WGII AR4 report – about the part of The Netherlands that is lying below the sea level. But after Himalaya gate this was suddenly enough to have a sea level gate. It’s all hyperbole but climate “activists” use this in their favor most of the days when the media is eager to exaggerate their latest findings:

This time IOP, the publisher of ERL replied quickly and complained about the non-news becoming news:

“With current debate around the dangers of providing a false sense of ‘balance’ on a topic as societally important as climate change, we’re quite astonished that The Times has taken the decision to put such a non-story on its front page.

I wish publishers and/or scientists were always so keen to correct decisions of the media, e.g. in case scientific claims are exaggerated.

Anyway, we now know a little more about the rejected paper of Bengtsson and four colleagues because IOP released one of the negative referee reports. This shows that the paper has a lot of similarities with the Lewis/Crok report. The reviewer starts with this:

In our report we also describe the energy budget method. We actually favor it and claim it currently gives the best indication of the climate sensitivity of the current climate. Nic Lewis now defends this position in the Climate Dialogue that the Dutch institutes PBL, KNMI and myself have set up about this topic.

Lewis and I were criticised for publishing our report at GWPF instead of in a peer reviewed journal. Lewis has published in peer reviewed journals (and even I have one publication) and will do so again so we are not against that. We were and are convinced though that such a long analysis of parts of an IPCC report is not regarded as new science and will therefore be rejected. The referee report of the Bengtsson paper also suggests this:

The overall innovation of the manuscript is very low, as the calculations made to compare the three studies are already available within each of the sources, most directly in Otto et al.

The referee report contains some awful language that reminds us of the let’s not give fodder to the skeptics remarks in some climategate emails:

Summarising, the simplistic comparison of ranges from AR4, AR5, and Otto et al, combined with the statement they they are inconsistent is less then helpful, actually it is harmful as it opens the door for oversimplified claims of “errors” and worse from the climate sceptics media side.

These kind of motivations should have no place in a reviewer’s report and if I were the reviewer I would have been unhappy to make my report public like IOP now did.

[Update]
Steve McIntyre has some interesting observations about the reviewer’s report as well noting that the main shortcoming/error of the paper seems to be the fact that it compared observations with models where “no consistency was to be expected in the first place”. McIntyre:

Thus, the “error” (according to the publisher) seems to be nothing more than Bengtsson’s expectation that models be consistent with observations. Surely, even in climate science, this expectation cannot be seriously described as an “error”.

Bengtsson is trying to walk this back now. Links everywhere. Pass the popcorn.

Non-news becoming news happens all the time in the media, this is how they work. When they smell there is an “affair”, tiny things suddenly get promoted to the frontpage. That’s true, but in this case I wouldn’t be surprised if there was a little nudge from the GWPF. It’s well-known that Lawson has ties in the publishing world (being an editor for quite a while). And it’s also well-known that Rupert Murdoch, owner of a very large number of media outlets, is a staunch denier of the possibility that AGW could have serious consequences. There’s a false balance in… Lees verder »