Yesterday I was keynote speaker at a one day conference in Leeuwarden, organised by the water technology institute Wetsus. First I want to thank the two directors of Wetsus, Cees Buisman and Johannes Boonstra, for giving me the opportunity to present my view on the global warming debate. Next, they gave each of the 150 participants a copy of my book. By doing this they greatly support the kind of research I have been doing over the past three years and hope to be doing in the next few years. This kind of support makes it possible to stay independent as a journalist and do investigative reporting.

As most of the participants are working in the water business (waste water treatment, drinking water etc.) I decided to concentrate my lecture (my PPT is available here) on the role of water in the climate debate. This turns out to be quite interesting because the global warming debate is more about the role of water than about the primary radiative effect of CO2, which is well understood and accepted by all parties.

The main issues remain that a theoretically expected warming from CO2 does not mean that the recent warming (1980-now) is caused by CO2, that there seems to be no global warming in the oceans in the last decade, that most of the future warming in the models is coming from water vapor and cloud feedbacks but that currently the observational evidence for these feedbacks is not yet very strong, let alone evidence for a net positive feedback.

As half of the participants were not Dutch my presentation was in English. For many slides I didn’t provide the sources so I will use this post to give some background and sources for my talk.

The picture in slide 4 is coming from this recent blog post of Jeff Condon, which was also picked up by Roger Pielke sr. here. The simple point is that the energy content of the oceans is about 1000 times larger than that of the atmosphere and therefore that we should diagnose global warming in the oceans and not on land with the problematic surface temperature measurements.

Acceleration of global warming?
I then showed some examples of Lucia Liljegren’s latest comparisons of models vs observations making the point that global warming lately is decelerating and not accelerating. After the talk a PhD student of Wetsus ran in front, grabbed the microphone, complained that I cherry picked, and showed the GISS results instead of the HadCrut results that I showed. For him, here are the results for GISS: http://rankexploits.com/musings/2011/giss-march-anomaly-rose-to-0-57c/ He is right, GISS is doing slightly better than HadCrut, but still far away from what the models are showing. I pointed him to chapter 2 of my book which gives all the details about the problems with the surface temperature measurements.

As sea level rise is a big issue for The Netherlands, I also used a plot from World Climate Report, showing that the trend in the satellite data is decreasing, which fits with other data we have from the oceans, e.g. both SST and Ocean Heat Content data.

I then explained that we should use Ocean Heat Content (slide 11-13) as the metric to diagnose global warming (or cooling). The plot is coming from Pielke sr. again, and he got it from Josh Willis. Pielke explains here why the diagnosed 0.2 W/m2 is lower than expected.

Water vapor feedback
I introduced the concept of feedbacks to my audience (many of which had PhD’s but not in the field of climate science) and showed this IPCC figure. Water vapor is the main positive feedback in the models. It is intuitively very plausible because warmer air can in theory hold more water vapor. IPCC was quite confident in AR4 that water vapor is a positive feedback (slide 19). However more sceptical scientists like Roy Spencer here and Roger Pielke here keep pointing to counter arguments and evidence for a lack of a positive trend on a regional scale (here and here).

The IPCC figure showing a rise in water vapor content is based on a paper by Kevin Trenberth which is online here. Recently Trenberth published a similar paper on water vapor and precipitation but the earlier figure which showed the period 1988-2004 was not updated. Other datasets like AMSR show no change in water vapor concentration in the last decade. So this makes the trend in the IPCC graph (which was 1.2% per decade, based on 17 years) smaller.

There are other data sets, for example the NVAP data set of Nasa, that so far show no trend in water vapor since 1988. Pielke sr. again picked this up on his blog last year. He highlighted this quote of Tom Vonder Haar who is involved in this data set:

By examining the 12 year record [1988-1999], a decrease of TPW at a rate of -0.29 mm / decade is observed. This relationship is significant at the 95 % but not at the 99 % level. A downward trend would be intriguing since there should be a positive slope if a global warming signal was present. However, by subdividing the data into two halves (1988-1993) and 1994-1999, trends with opposite signs are detected. Since the trend is not robust by subdividing the data, we conclude the global TPW has no significant trend from the NVAP dataset studied here.

I found an AGU presentation about the NVAP dataset by Janice Bytheway, who is working in the Vonder Haar group in Fort Collins. (google her name and it comes up high in the list). She is showing this figure, with the disclaimer that it’s still work in progress:

The upper series is for oceans only, the lower for ocean/land combined. See her presentation for more details. They didn’t say anything about trends so I decided to contact Tom Vonder Haar who sent the following reply:

We have most definitely never said the preliminary NVAP data show a negative trend and anyone who does is making a false scientific statement.
All we can say at present is that the preliminary NVAP data, according to the Null Hypothesis, cannot disprove a trend in global water vapor either positive or negative.
In addition, there are good reasons based upon both Sampling / Signal Processing Theory and observed natural fluctuations of water vapor ( ENSO’s, Monsoons, volcanic events, etc. ) to believe that there are no sufficient data sets on hand with a long enough period of record from any source to make a conclusive scientific statement about global water vapor trends.
I believe discussion and informed speculation is healthy for Earth System Science when properly reported.  As you know the most recent IPCC assessment went into considerable detail about Uncertainty and I support even more of this work.  It helps focus our scientific attention on key areas where improvements should and can be made.
Water vapor variability and feedback is one such area and that is the reason for the Re-analyses and improvements to the NVAP data set.  We are planning first release and discussion of our new results of NVAP-M ( sponsored by the NASA MEaSUREs research program ) at the World Climate Research Programme Science Conference in Denver, CO in October, 2011.  That will begin a period of more than one year wherein we will intercompare the NVAP-M results with independent estimates by colleagues in both the US and international community.  The checks and balances provided by such a collaborative effort should then produce a credible statement about our rapidly increasing knowledge of variability and trends of water vapor.

Now although of course he is very careful – as most scientists are – these statements are far less certain about the observational evidence for a positive water vapor feedback than IPCC was in AR4. There they wrote in the Summary for Policy Makers:

The average atmospheric water vapour content has increased since at least the 1980s over land and ocean as well as in the upper troposphere. The increase is broadly consistent with the extra water vapour that warmer air can hold.

Now this of course sounds much more certain than the remark of Vonder Haar that ‘there are no sufficient data sets on hand with a long enough period of record from any source to make a conclusive scientific statement about global water vapor trends’. So I think we all look forward to hear more about this important data set next October in Denver.

The Greek hydrologist Demetris Koutsoyiannis showed me this graph based on the GPCP project: 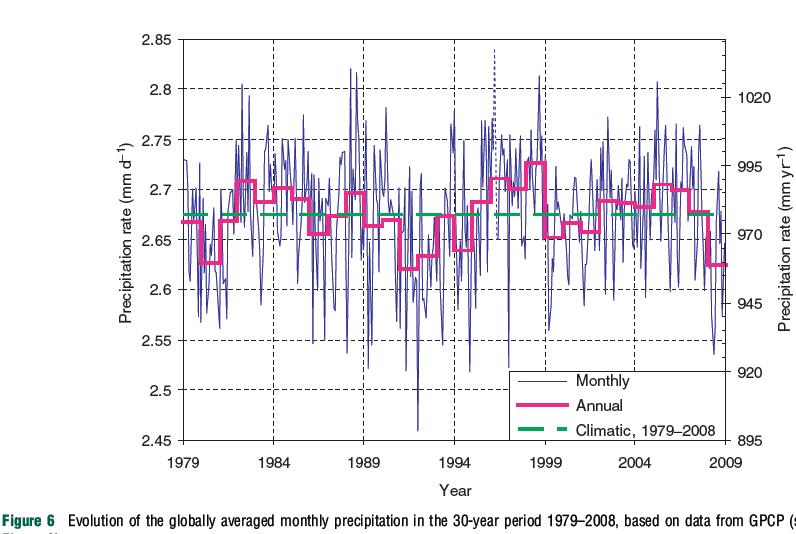 Koutsoyiannis recently presented an analysis about trends in extreme precipitation at the EGU conference concluding that especially since 1970 there is no trend at all. Also at EGU he showed that models underestimate extreme rainfall for some stations around the Mediterranean up to a factor of ten. This poses serious questions about the attribution study of Zwiers and coauthors in Nature, who used climate models to conclude that CO2 already contributed to an increase in extreme precipitation. An increase by the way that was not confirmed by the recent analysis of Koutsoyiannis. The dreary state of precipitation in climate models was also confirmed by Graeme Stephens who stated in his paper:

All in all it was really interesting to look so deeply into the role of water in the global warming debate. Very little seems certain. Even the so obvious positive water vapor feedback is hard to find in the observations. There seem to be no trend in either total or extreme precipitation.

Given these sober facts about precipitation it’s no surprise that Koutsoyiannis found no trend in floods worldwide either.

That’s pretty sobering in a media world where almost every flood is connected to global warming.

CAGW is dead as a doornail.

Hier een artikel van CNN over de Mississippi-crisis. The crisis is centered on the stretch of the Mississippi River between Memphis and St. Louis, but it relates to a far broader issue of excess water in the river and its tributaries. Engineers have warned that should the rising waters of the Mississippi River overwhelm the entire flood control project, it could deluge cities, destroy crops, destroy businesses and paralyze river transportation. Engineers already have reported sand boils and seepage at a number of levees near the confluence of the Ohio and Mississippi rivers, a condition that Walsh said also threatens… Lees verder »

“Using only the yesterday’s and today’s temperatures, it looks like we’re in a cooling trend”